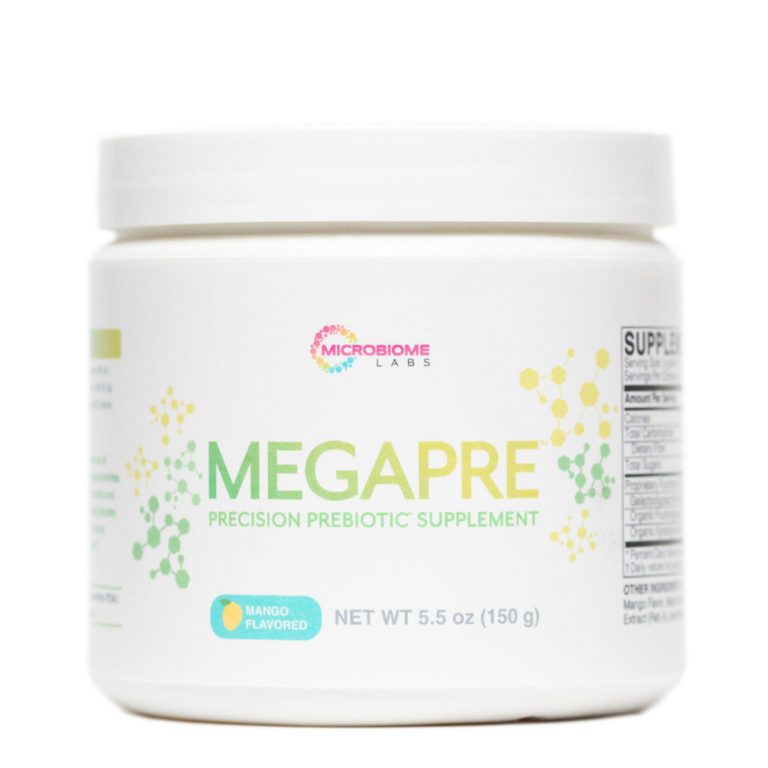 MegaPre™ is a cutting-edge Precision Prebiotic™ supplement made up of clinically-tested, non-digestible oligosaccharides that can increase microbial diversity and selectively feed beneﬁcial, keystone bacteria like Akkermansia muciniphila, Faecalibacterium prausnitzii, and Bifidobacteria. Prebiotics are non-digestible ﬁbers that feed the bacteria living in your gut. However, most prebiotics on the market can feed both harmful and beneﬁcial gut bacteria, which can exacerbate digestive issues. Keystone bacteria like bacterium prausnitzii, and Biﬁdobacteria are very important for human health, but their populations can be easily diminished by antibiotics, stress, diet, glyphosate, and other environmental toxins.

Keystone bacteria like Akkermansia muciniphila, Faecalibacterium prausnitzii, and Bifidobacteria are very important for human health, but their populations can be easily diminished by antibiotics, stress, diet, glyphosate, and other environmental toxins.

MegaPre™ contains a proprietary blend of functional fibers that specifically feed these keystone bacteria. This unique blend is made up of clinically-tested-and-published, non-digestible oligosaccharides, derived from non-GMO green and gold kiwi fruit, non-GMO corn cob, and rBST-free cow’s milk

The findings of these oligosaccharide studies are quite impressive:

Increasing populations of these protective bacteria is an integral part of reinforcing a healthy gut microbiome.

Nourish the powerful ecosystem in your gut with MegaPre™ today!

CONTAINS: Corn and milk. One or more ingredients derived from lactose from bovine milk and non-GMO corn cob

Suggested Use
Start with ½ scoop daily for one week, then increase to 1 scoop daily with or without food, or as directed by your healthcare practitioner. Mix into 16 oz of cold water or liquid of your choice.