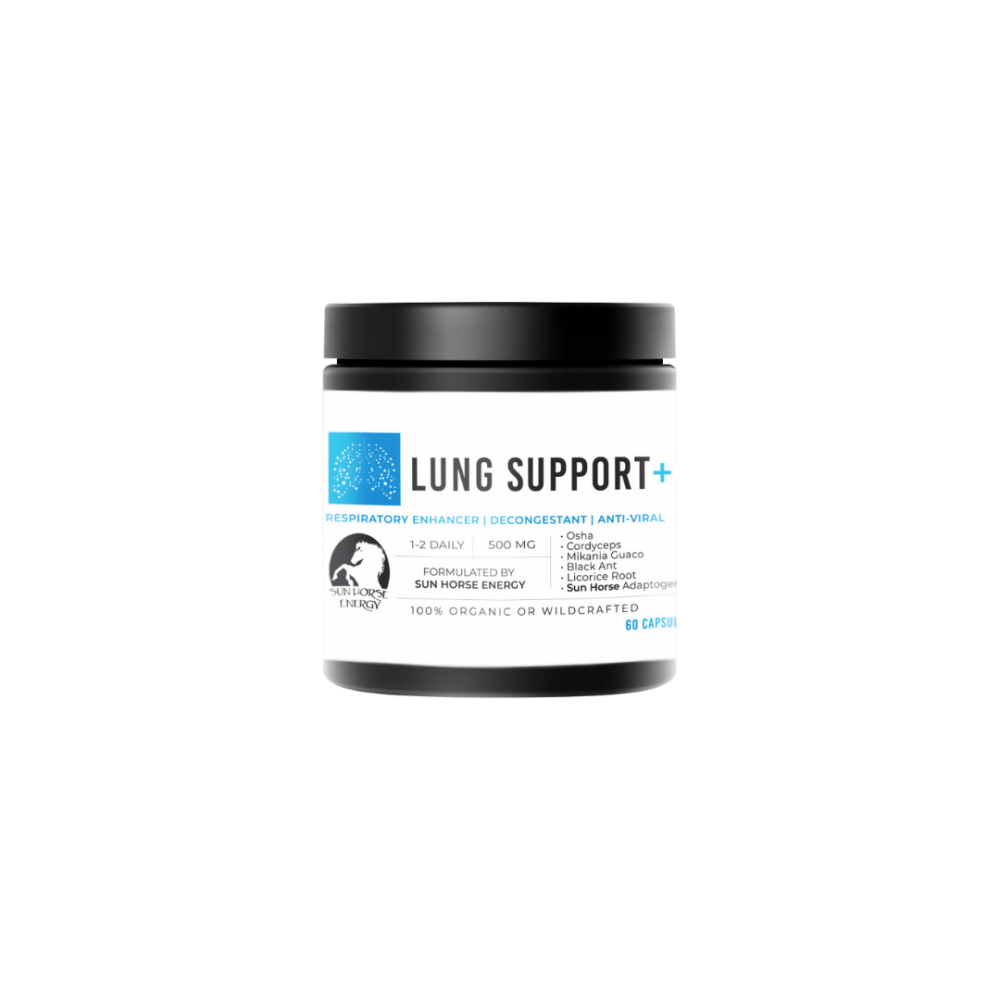 By Sun Horse Energy
60 Capsules
In Stock
SUNHORSE-007
In stock
Fulfilled by TheDR.com - this item will arrive in a separate shipment.

The roots of the formulation for Lung Support dates back to 1973, when Sun Horse Energy founder and master formulator, Dan Moriarty, was stung by a venomous scorpion while camping on a beach in Mexico. [READ THE FULL STORY HERE]

If it wasn’t for Mikania Guaco, one of the lung tonics in Lung Support, Dan might very well not have survived the scorpion sting. The scorpion that envenomated Dan is one of the most toxic in the world. It stung him on the shoulder, very close to the lungs. Within seconds, the venom closed off Dan’s airways. He thought he was going to die. Luckily, a Huichol medicine healer saved his life with Guaco. Within minutes of taking it, Dan was breathing normally again. Since then, Dan has dedicated his life to studying herbs, and guaco is one herb that Dan takes with him every time he travels.

“Getting stung made me aware of my lungs,” says Dan, adding, “And guaco has been in my personal medicine toolbox ever since.”

The well-being of every organ in your body is in big part, predicated on the ability of your lungs to take in oxygen and transfer it into the bloodstream and tissues.

A traditional Native American herb, Osha is also known as “Bear Root”. Native Americans noticed that when bears emerged from hibernation, the first thing they did after being in a state of torpor for 4 months was not feast on salmon or drink water, but rather, dig up osha and eat it. Why? It decongests and wakes up the lungs. Native Americans who used Osha were able to run further, and treat their colds and congestion. Modern research studies suggest Osha may support the immune system by offering protective effects against oxidative damage.

Cordyceps, a genus of mushroom, gained lots of attention after Chinese long-distance runners performed impressively at international competitions in the 1990s and early 2000s. Along with high-altitude training, supplementing with cordyceps was part of their intense training program. A research study concludes that cordyceps improves tolerance to high-intensity exercise after supplementation with it because the fungus is thought to increase blood flow, enhance oxygen utilization; it also acts as an antioxidant.

“Guaco” is Sun Horse Energy founder Dan Moriarty’s favorite herb, and the reason why he’s still alive. Traditionally, it’s a well-known herb for snake bites, scorpion stings and other venomous creatures. Guaco acts as a non-steroidal bronchodilator, meaning it opens up the airways without steroids. As a result of guaco opening up the airways, the alveoli (tiny air sacs in the lungs) are better able to accept oxygen transfer and get rid of carbon dioxide. In Brazil, Guaco syrup is one of the most popular herbal medicines used to treat the symptoms of asthmatic bronchitis, cough and hoarseness.

A Chinese medicine tonic, Black Ant is used to support energy levels. (In traditional Chinese medicine, Black Ant is given to increase vital Qi.) Research studies demonstrate that Black Ant supports the function of the thymus gland, which plays a crucial role in the immune system, producing and activating lymphocytes.

Perhaps the most commonly-used herb, featuring in approximately 40% of all traditional formulas, licorice root possesses anti-viral properties. One of the 13 adaptogenic herbs in Sun Horse Energy’s Global Resonance Formulation, licorice root supports the immune system by encouraging homeostasis (balance). The pollution from cars and other noxious chemicals in the air can suppress the immune system. Licorice root can help prevent immune suppression.

A 2015 study says licorice root, which has been used as a healing herb for at least 4,000 years, says that two triterpenoids—GL and GA—are responsible for the root’s anti-viral properties.

Lung Protection can be used daily or cycled. For optimal results, take 1 capsule (500 mg each) twice daily with or without food.